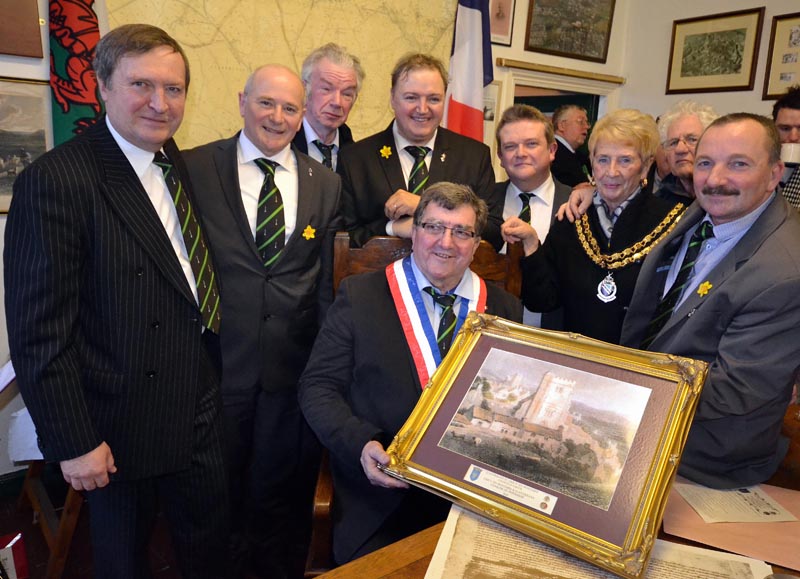 On St David’s Day the Mayor of Crecy-en-Ponthieu Gerard Lheureux and the Chairperson of Llantrisant Community Council Cllr Veronica Nicholas officially signed a declaration of friendship in the medieval Guildhall.

More than a hundred local residents, business people and representatives of organisations witnessed the historic event as the charter was signed on the table alongside Llantrisant’s famous silver mace from 1633, older than the one used in the House of Commons.

Gifts were exchanged between the new-found Welsh and French friends with a framed image of Llantrisant presented to the Mayor of Crecy along with the Freeman’s ties for each of the male visitors in the group. Shields and specially brewed Crecy ale were presented to the people of Llantrisant and a wonderful atmosphere prevailed throughout the ceremony.

It was the highlight of the weekend for 11 visitors from Crecy en Ponthieu. During their visit they spent much of their time in Llantrisant where they enjoyed a welcoming concert by Llantrisant Male Choir, along with visits to Rhondda Heritage Park and Cardiff Bay and the Senedd.

They enjoyed plenty of local hospitality, with dinners at The Bear, New Inn and a warm welcome in the Cross Inn on the evening when Wales beat France in the rugby international at Paris.

Businesses and residents decorated the old town with French and Welsh flags in honour of their arrival.

Cllr Veronica Nicholas, Chairperson of Llantrisant Community Councill explained, “This is a truly historic event. Together we can offer unique opportunities to understand the valuable history and culture of our twin towns.

“Although the association has been there for over 650 years, it did not begin as one of harmony and friendship, something that this event symbolised.”

In 1346 the famous longbowmen of Llantrisant fought for the “Black Prince” of Wales at Crecy, defeating the King of Bohemia and claiming his emblem of three ostrich feathers which has been adopted by every prince since.

Those gallant Welshmen, known as the “Black Army” returned to their hilltop home and were awarded the freedom of the ancient borough, an honour that the Freemen of Llantrisant continue to uphold despite the passing of the centuries.

The connection between the towns was rekindled with a visit from Llantrisant Male Choir who performed a concert at Crecy and formed a deep bond of friendship with residents of the French town. They were introduced to the Mayor of the town thanks to Welsh TV producer Geraint Hughes who enjoyed a close association with the residents there.

Llantrisant Town Trust, who supportws the twinning, manage the rights and lands of the Freemen whose ancestors fought at Crecy all those centuries ago.

Trustee Dean Powell explained, “The battle that took place there in 1346 was a pivotal moment in British warfare because of the victory that was ensured by the Welsh archers which included the men of Llantrisant.

“It was one of the most important battles of the Hundred Years' War due to the combination of new weapons and tactics used.

“We are immensely proud of the history of our town and its inextricable link with Crecy which, after the passing of the ages, has now come together in this bond of friendship.”