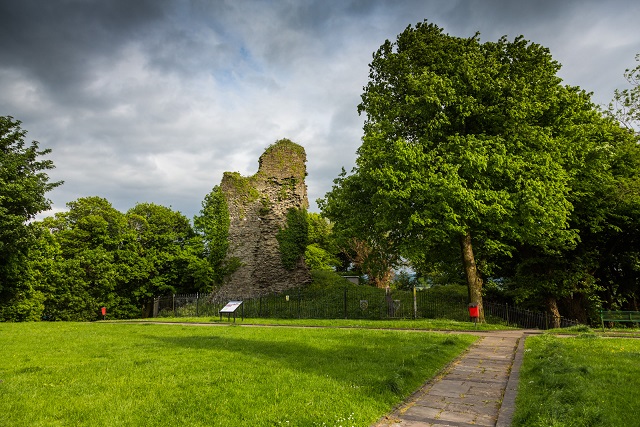 A decade after the Norman invasion of Britain it was King Caradog who was sole ruler by 1077 and warded off Norman intervention by paying tribute to William the Conqueror.

It allowed Caradog the freedom to war with Rhys ap Tewdwr, King of Deheuabrth and he fell in the battle in 1081. Following Caradog’s death it brought William the Bastard swiftly to the scene to overpower Rhys from taking over the kingdom and stamp his authority on south wales. No welsh king continued in the area and William became overlord of Caradog’s kingdom which was divided amongst a number of nobles.

Glamorgan, or Morgannwg, was originally an early medieval kingdom of varying boundaries known as Glywysing. Although initially a rural and pastoral area of little value, the area was a conflict point between the Norman Marcher lords and the Welsh princes, with the area being defined by a large concentration of castles.

The last of the Glamorgan Welsh Lords was Iestyn ap Gwrgan (1040-1091) who saw the kingdom fall into Norman hands following the assault of Robert Fitz Hamon (1042-1107), 1st Earl of Gloucester and Lord of Glamorgan. The precise details of the Norman conquest of Glamorgan, and how much Iestyn was able to organise is not known but he is presumed to have been killed at the hands of Fitz Hamon.

Iestyn ap Gwrgan, was the great grandson of King Morgan Hen who ruled the country between the Tawe and the Taff.  We can safely assume Llantrisant was a settlement at this time. We know Iestyn owned an estate called Villa Milue in the Garth Maelog Estate which he granted to Brishop Herwld in 1093. Iestyn may well have been governor under King Caradog.

Robert Fitzhamon attacked South Wales in around 1091. He ordered the construction of a motte (mound) and wooden bailey (keep) in the middle of the dilapidated Roman castrum in Cardiff.  Once Fitz Hamon had control of  he allowed the remaining Welsh Lords to manage the surrounding mountainous region. The arrival of Fitzhamon saw the first Anglo-Norman Lordship of Glamorgan, one of the most powerful and wealthy of the Welsh Marcher Lordships. Like all Marcher lords, he ruled his lands directly by his own law: thus he could, amongst other things, declare war, raise taxes, establish courts and markets and build castles as he wished, without reference to the Crown. 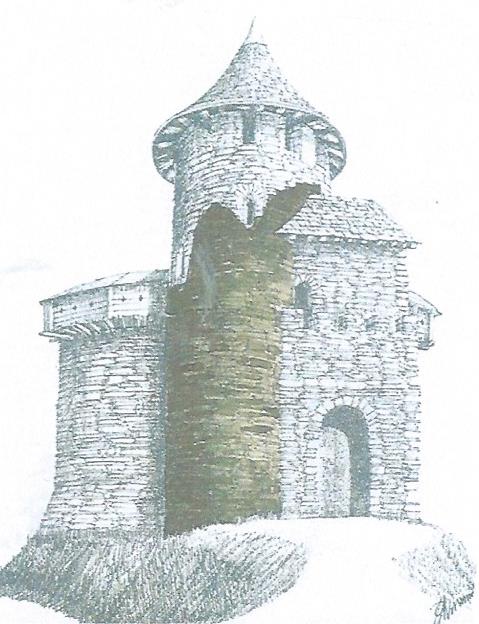 The Lordship was split after it was conquered; the kingdom had the town of Cardiff as capital and took in the lands from the River Tawe to the River Rhymney. The Lordship also took in four of the Welsh cantrefi - Gorfynydd, Penychen, Senghenydd and Gwynllwg. The lowlands of the Lordship of Glamorgan were manorialized, while much of the sparsely populated uplands were left under Welsh control until the late 13th century.

Further change came with the death of Rhys ap Tewrdwr in 1093 in the battle against the Normans invading Brecon. Robert Fitzhamon presumably took the opportunity to extend his power and take the vale area as far as the Ogmore River. Probably Iestyn ap Gwrgan paid homage to him, rather than an actual conquest.

Llantrisant had such a strategic position without which it would have been difficult to hold the lower Ely valley in peace and without doubt it had some presence at this point. At this time the Bishop Urban reigned from 1107 to 1134, He was a Welshman and creator of the Diocese of Llandaff and builder of the first Norman cathedral beside the Taff. Could he possibly be the man behind the creation of the huge parish of Llantriant out of an original foundation? Could he have persuaded the Norman overlord to build a fine Romanesque church just as he was doing at Llandaff?

Fitzhamon died in 1107 and the title was handed to his daughter, Mabel Fitzhamon who married Robert Fitzroy (Robert Consul), 1st Earl of Gloucester (c 1100-1147), the eldest illegitimate son of King Henry I of England. There is no evidence to suggest he was challenged during his reign of Glamorgan from 1107-1147.

Earl Robert acquired the lowlands but Caradog ap Iestyn was in control of the area north of Llantrisant. A Welsh counter attack was unleashed in December 1135 on the death of Henry I but we have no evidence of this affecting Llantrisant. We can only assume that at the time sporadic warfare was the norm.

The title of Earl of Gloucester and Lord of Glamorgan was later passed to his son, William Fitz Robert (1147-1183) and finally to his daughter, Isabel, (c. 1173-1217). Although married twice (firstly to Prince John, the youngest son of Henry II) she died childless.

Llywelyn ap Iorwerth, Prince of Gwynedd, held the lordship of Brecon at this time and probably gave his support to independent lords of Glamorgan whose firm allegiance he received. When he died in 1240 his son was unable to exert the same influence and the young Richard de Clare took control. Drastic action took place with the building of his administrative centre in a castle at Llantrisant in 1246.

The Normans In Wales 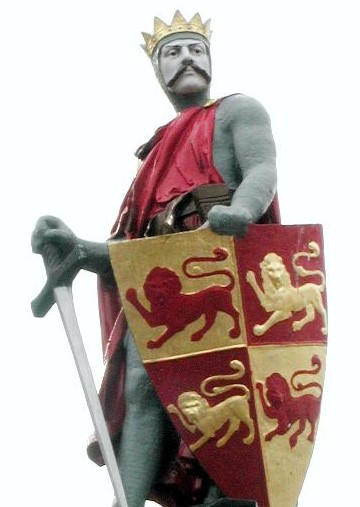 The Norman Barons responsible for the conquest of Wales were a small group of men, rarely exceeding twenty in number, who, in the immediate aftermath of Hastings, were far too busy with problems of security and control in England and Normandy itself to give much attention to Wales.

However, the defense of a frontier soon turned to aggressive expansion. Having practiced the techniques in England and elsewhere, they well understood that the first rule of successful appropriation was to make sure of the territories overrun. To this end, the Normans had developed the castle. Castles had not yet existed anywhere in Wales before the Norman Conquest. Yet over the following two centuries many hundreds were to be established. In order to understand the pattern of building a little more clearly, it is well to think from the outset of a three-fold division.

First, by far the largest group of castles were those built by the Anglo-Norman lords of the March (from the French word marche meaning frontier). The Marcher lordships eventually swung in a great arc from Chester in the north to Chepstow in the south, and then west to Pembroke. The grandest and most powerful of these strongholds were those built by the lords themselves: Caerphilly, Cardiff, Chepstow, Kidwelly, and the rest. But there were smaller examples too, such as Bronllys and Tretower, built by followers and lieutenants of the major barons.

The second group was confined largely to the north and west of the country, the area known from the late 12th century as pura Wallia (pure Wales). Following the Norman Conquest, it was to take 200 years before Edward I extended the overlordship of the English kings to this area. The Welsh princes had, however, begun to imitate the Norman example soon after 1100, and gradually castles spread throughout their territories. Today, fine later Welsh stone building can be seen at Dinas Bran, Dinefwr, Dolbadarn, or Dolwyddelan.

Finally, in the background of this castle-building in Wales stalk the figures of the English kings. Until the late 13th century, their influence and involvement were not great, but, when employed, the royal hand was generally steady and the policy assured. Though having something of a chequered history, Carmarthen served as a royal castle from the reign of King Henry I (1100-35). At Newcastle, Bridgend, and White Castle, substantial building works in the 1180s were probably commissioned by Henry II.

Plundering ruthlessly along the river valleys and coastal plains, the Norman lords set out to terrorize the country and force the Welsh into subjugation. As early as 1067 William the Conqueror placed William fitz Osbern, one of his most trusted confidants, at Hereford. By 1071 Roger of Montgomery had been installed at Shrewsbury, and Hugh of Avranches ("The Fat") at Chester. In each case a new earldom was created, and in each case a new earl was granted royal demesne in the country and control of the county town. Within these virtually independent lordships - the foundation of the March itself - the earls ruled as miniature kings.

Before his death in 1071, Fitz Osbern had overrun much of south-east Wales, and his exploits had set the pattern for the remaining conquest of this area. In all of the Norman's initial advances, the castle was the means by which short-term victory was converted into conquest and domination. Only in the most securely held areas of the march do we find substantial stone castles of early date. The outstanding example is the work of William Fitz Osbern at Chepstow, where the keep - still the core of the castle today - was built during 1067-71, and was quite exceptional for the period. Gradually, as the 12th century progressed, the use of stone became more common, sometimes at new sites, but more often replacing earlier timber constructions.

The end of Henry II's reign marks something of a watershed. It would be some years before an English king would invade Wales again. What is more, the map of the division of the country between Marcher lord and Welsh principalities had reached the shape that was to last, in the main, right through to 1277 and the conquests of Edward I.